This case study is based on the work of Jenny Campbell, CEO and Lead Researcher at The Resilience Engine - www.resiliencengine.com and Campbell J. (2019) The Resilience Dynamic® Great Britain:  Practical Inspiration Publishing, as well as Anne Archer of Anne Archer Associates - annearcherassociates.com

Mr Z is an ambitious 30-ish line manager in a high-pressured sales function of a global manufacturing organisation.

We had known each other through the leadership development workshops and programmes that I had designed and delivered in the organisation.   When we started our coaching work in June 2019, he had recently been promoted to a team leadership role that would involve influencing more senior people and peers in a range of functions. As a participant, Mr Z engaged well intellectually, he led discussions and activities and was very confident of his abilities; almost over-confident to the point of bordering on arrogance.  In his previous role, his performance rating was consistently high, and the organisation considered him to have potential and talent whilst recognising that he needed to mature a little.

At this first meeting Mr Z was at the start of the Whoosh defined by Jenny Campbell as:

“This isn’t one step, it’s a long line of tiny incremental improvements that together shift your resilience towards a level that is both stable and on which you can depend.” (Campbell (2019) (p79))

“Stress doesn’t really figure here in the same way.  Instead of stress, you absorb pressure…You have enough capacity for doing many more things you want to do. (Campbell (2019) (p118))

Energised by the promotion and opportunities ahead, Mr Z recognised the start of another leadership journey whilst mindful of the new learning and leadership skills he would need to develop through our coaching work. For him the recent promotion recognised his level of competence and confidence. At the first session he explored a personal long-time leadership development area of stretch; that of building trusting relationships.  With his new team leadership role and the need to influence more senior people and peers, this topic had grown in importance and urgency.  He summed this up in the following question,

“How can I create a safe and trustful environment for people to say what they want and for me to be able too?”

I reflect now on the strong level of his adaptive capacity in terms of his focus on the external goal of both the new role and his learning agenda and the links to another core model from the work of Jenny Campbell: 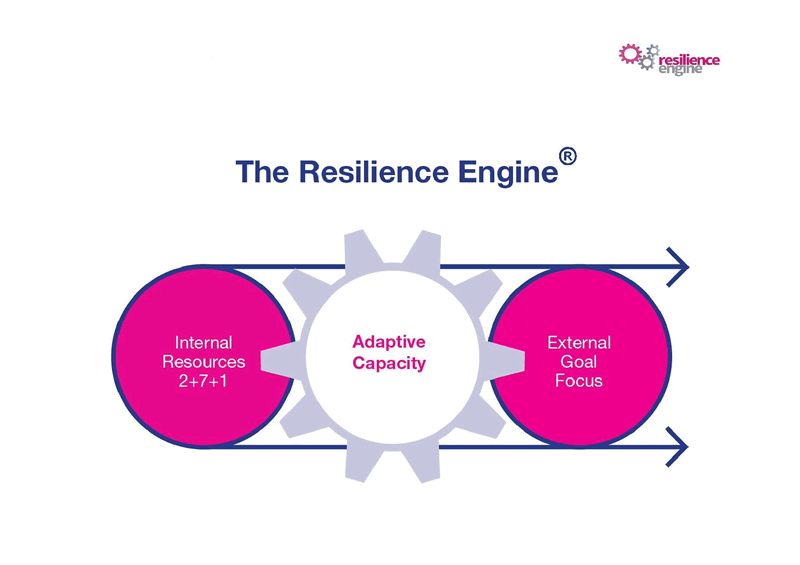 He demonstrated strong Internal Resources:
All in all, his starting session aligned clearly to being somewhere on the Whoosh.

What a difference three months can make.

As Mr Z. walked into the room his posture was more slouched and his walk less energetic.  When he started to position the last three months he talked of a frustrating few months, fraught with many challenges outside of his influence.  I noticed two questions that he voiced almost wearily:
I positioned my observation about what he had said and the way he had said it and introduced The Resilience Dynamic (Campbell (2019) (p80). There was a recognition of one or two examples of ‘Bounce Back’:

“Experiencing the ups of this state can feel like being on top of the world.  However, there is a cost attached to Bounce Back, which is fatigue.” (Campbell (2019) (p79)

“When you are in Bounce Back, you have already figured out that you can recover from setbacks.  You experience stress and you have learnt how to handle it pretty well.  You may persist but experience fatigue.” ((2019) (p120)

When I asked him where he was and to mark on the Resilience Dynamic® diagram (Figure 1) where he was, he very firmly positioned himself between Coping:

“When you are Coping, you are just managing what you need to do, versus the capacity you have.  All your energy is spent on managing what is on your plate……It’ll be better tomorrow.” Campbell (2019) (p126)

and Break Up / Fragmentation:

“Every so often things are ok, but most often things are not ok.  In work terms this can have a strong impact on performance.  In personal life, it can put relationships under extreme pressure.” (Campbell (2019) (p129)

Mr Z had set his agenda for the session:
“To explore my level of resilience and to see how to change things.”

I introduced the STEM framework (Sleep, Think, Eat, Move, Connect - Anne Archer of Anne Archer Associates - annearcherassociates.com) as a way for Mr Z to identify what symptoms he was experiencing that led to his positioning on the diagram.  He easily reeled off a list:
The list of points set me thinking of handouts that I had designed during my training as a tool to work with, and we explored a little more (See Appendix A and B) and an opening statement in The Resilience Dynamic (Campbell (2019) (p xv):


Asking him where he wanted to prioritise his energy, based on his positioning he still had capacity to do this, he immediately said “Sleep” as this, in his view, was the input to the other four – Thirst, Eat, Move, Connect - that he saw as outputs.  I noticed a palpable shift in his energy to a more upright posture, stronger tone of voice and the reappearance of some Internal Resource from the earlier Resilience Engine® model on page 2:
However, the lack of sureness and belief remained though: When gently pushed:
Mr Z’s response:
The follow-up:
Mr Z’s response:
He had moved along the Whoosh a little further towards Break Through. It is useful to reflect here that few people achieve Break Through consistently and it remains to be seen if this is a stable positioning or more of a Bounce Back.  He is likely to spend some time in Bounce Back – although not necessarily too much because of his previous Whoosh journey to Break Through - compared to those that have never experienced the Whoosh before who are likely to find it a much longer journey of self-awareness and discovery to self-management.

“Break Through is where you have the highest resilience; you embrace change.  It’s where you are resourceful, adaptable and energised no matter what is going on.” (Campbell (2019) (p79)

“Stress isn’t really felt negatively at all here; instead you have an enormous capacity for what you do.” (Campbell (2019) (p79))

and in doing so worked to reinstate a new set of habits to turn into his ‘resilience practice’. (Campbell 2019 (p241))

Mr Z developed the following list/schedule:
The session was at an end.  He stated his action to re-establish the routine and I pushed for timings to really ground.

What a glorious session; I love my job!


Appendix A - Symptoms of Overload

When you are suffering from undue pressure or what is typically called stress, your body reacts with early warning signs. Knowing your early warning signs enables you to take action earlier. Investment in your wellbeing, and in particular having a steady energy level will stop you progressing to a lower level of resilience, and therefore protect your health more. Warning signs are personal to you. They will come from our seven bodily systems, as per the table below.  Which ones refer to you? 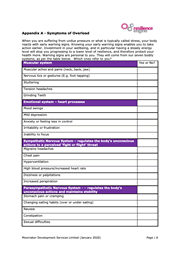 Appendix B - Tweeted by Dr Victoria Galbraith, 4th May 2017 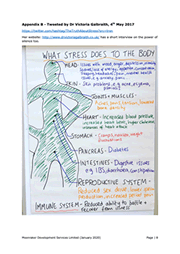 Her website: www.drvictoriagalbraith.co.uk has a short interview on the power of silence too.

Mark on the blank outline what you notice in you.